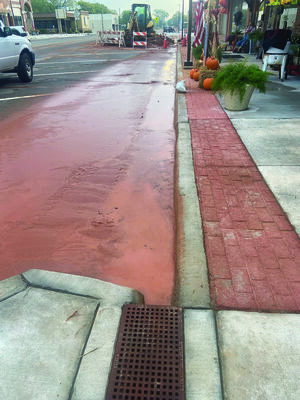 Mud Creek Creations received an unpleasant surprise when a waterline broke near the downtown business, literally making it a mud creek, and flooded about a 1/3 of the store on Sunday.

“We were fortunate that people getting out of church saw it and started making phone calls,” said Jeanne McGowen of Mud Creek Creations. “If it had happened in the middle of the night, it could have been a lot worse.”

“This is the fourth time (since the new sidewalks have been put in) its been flooded because of the lack of drainage,” McGowen said. “We love the new sidewalks, but something about the drainage needs to be done.”

McGowen said Tuesday they were planning on calling ODOT to try to get them to fix the problem.

“They’re not working well with the city manager, so we’re going to call them,” McGowen said. “It’s going to happen again. We’re going to insist they do something about it.”

Several volunteers arrived to help try to minimize the damage to the business. City workers were called in to fix the leak. Bryan Collinsworth of the Stephens County Rural Water Department came in and lent a hand to the city.

“We had volunteers with brooms pushing the water away, but at first it was coming right back because it had no place to go because it couldn’t drain,” McGowen said.

Mud Creek Creations is expected to be open at its regular times.

“We worked in the store until we were exhausted,” McGowen said. “It is ready, it will depend on how the sidewalk and parking spaces look out front look.”

Mud Creek Creations is owned by Bob and Janet Coffer.