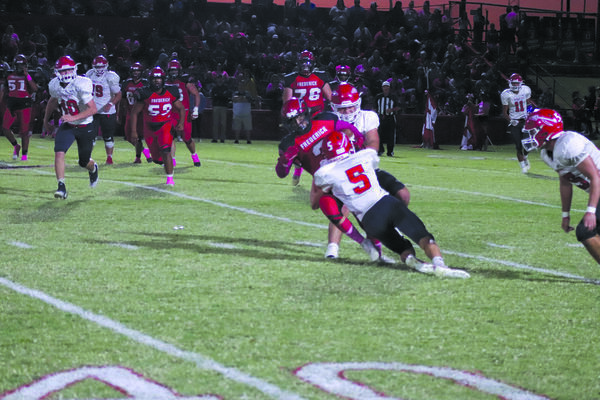 The Frederick Bombers turned away a couple of early scoring opportunities by Comanche and pulled away for a 59-0 win over the Indians in Frederick last Thursday.

The Bombers struck quickly on their first possession after forcing a Comanche punt, which was returned to the Indians’ nine. it only took two plays for Frederick to run the ball in for the first score of the night.

Comanche put together an impressive drive on its second possession. Starting at their own 25, the Indians methodically moved their way down the field as running back Braylen Butler shouldered much of the load. Quarterback Kooper Doucet also connected with receiver Jack Newton for a 32-yard gain in the series. After an eight-play drive to the Frederick four, the Indians couldn’t punch the ball in and on fourth-and-goal from the nine, an incomplete pass ended the drive.

It didn’t take long for Frederick to take advantage. Three plays later, the Bombers scored on a 70-yard touchdown run that pushed the score to 12-0.

Frederick would add another touchdown in the first quarter to go up 19-0.

On its first possession of the second quarter, Comanche got a big play when Doucet connected with Butler for a 51-yard catch and run for a touchdown, but the Indians were flagged for illegal procedure and the play was brought back. It would be the Indians final big threat of the game.

The Bombers went on to take a 40-0 lead into the half before adding three more scores in the second half to get the win.

The loss dropped Comanche to 2-5 overall and 1-3 in District 2A-3. They are currently tied for fifth in the district with Purcell and Crooked Oak. Washington, ranked No. 1 in the state in Class 2A, leads the district with a perfect 4-0 record. Frederick, Community Christian and Lindsay are tied for second with 3-1 district records.

Comanche will have an opportunity to add another game to the win column this Thursday when they travel to winless Little Axe (0-7, 0-4). After falling in overtime, 18-12, to North Rock Creek to open the season, the Indians have only scored 14 total points in the past six games and have been shutout four times during that span. Last week, the Indians fell to Crooked Oak by a 20-7 score.