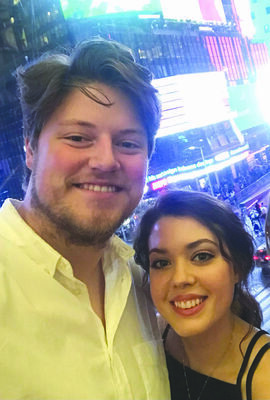 This past summer, husband and wife Cody Crow and Katie Tilley, both Comanche High School graduates, were named winners in the 2022 Next Generation Under 30 leadership program for the state of Oklahoma.

According to the Next Generation under 30 website, “(the) NextGen Under 30 mission is to identify and honor these very talented young Oklahomans, encouraging them to follow their lifetime family and career goals in Oklahoma.”

In addition, award winners are selected based upon their participation in and contribution to their communities. A panel of respected business and civic leaders serve as judges.

Tilley, a former Miss Comanche, was nominated for her work with the Josh Bollinger campaign. Crow is the head engineer for the Volt software development company in Tulsa.

Tilley was nominated by Bollinger for the honor. She was Bollinger’s campaign coordinator for his run for the U.S. Senate. He lost in the Democrat primary runoff to Madison Horn in August. Horn will go up against Sen. James Lankford in the general election on Nov. 8.

She was also a campaign fundraiser, accompanied Bollinger on his campaign stops and helped make contacts for the Senate hopeful.

“I’ve volunteered for a lot of campaigns, even when I was in Comanche,” Tilley said. “I ran my mother’s (Melissa Tilley) campaign when she ran for state representative in 2016. I just like to find a way to make a difference.”

She is now working on fundraising and helping out in hopes of getting State Question 820 passed. SQ 820 would legalize recreational use of marijuana.

Crow was nominated by the Volt CEO.

“I think he was nominated because he is 27 and already the head engineer of an important company that is a pioneer in text messaging and I think that caught their attention,” Tilley said.

They were not able to attend the awards ceremony this past weekend because of schedule conflicts, but Tilley is appreciative of the award.

“It really is an honor to be recognized for the work that I’ve put in,” Tilley said.