Comanche wins battle of the Indians with Little Axe 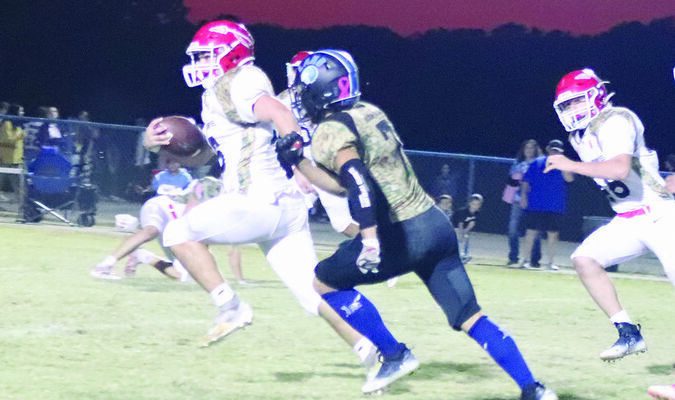 Wearing the Army National Guard “Game of the Week” uniforms suited the Comanche Indians just fine as they picked up their third win of the season with a 35-8 win at Little Axe last Friday.

Senior Night for Comanche was not supposed to be until this week at home against Washington, but it was the seniors who made most of the big plays in the win against Little Axe.

Senior quarterback Kooper Doucet threw for three touchdowns, senior running back Jack Newton ran for another and senior linebacker Kasen VanBuskirk returned an interception 40 yards for another score to account for all five of the Indian touchdowns.

Two of three Doucet’s touchdown passes went to seniors as well with one going to Noah Presgrove and another going to Newton.

The win kept Comanche (3-5) mathematically alive in the playoff race though they will need a big upset and some help from other teams with two games remaining. The Indians are currently sitting fifth in District 2A-3 with a 2-3 district record.

First, they would need to pull off a shocker against Class 2A No. 1 and undefeated Washington (8-0 overall, 5-0 district) this week and then beat Purcell (3-5 overall, 1-4 district) next week. Second, they would need for Community Christian to lose to Crooked Oak and Frederick in the final two weeks.

If that should occur, the Indians would slip in at the No. 4 seed. Washington, Frederick and Lindsay have already secured their playoff spots, only the seeding is left to be determined.

Against Little Axe (0-8 overall, 0-5 district), Comanche stopped the home team on fourth down at the Comanche 31 to end Little Axe’s first drive of the night.

Comanche then got a couple of key plays to lead to its first score of the night. On third-and-14 from Comanche’s 36, Braylen Butler, another Comanche senior, ripped off a 15-yard run on third-and-14 to pick up the first down. Later in the drive, Doucet and Butler connected with an 18-yard pass that set up Comanche with a first-and-goal from the one.

Newton took the ball in from there for the first score of the game. Presgrove’s extra point made the score, 7-0, with 2:50 remaining in the first quarter.

It would not take long for the second score. After the kickoff on second-and-14 from the Little Axe 32, VanBuskirk picked off a pass out of the air at about the 40, picked up some blocks and maneuvered his way through the Little Axe players before breaking into the clear and running into the end zone for the score. Presgrove kicked the extra point to make it 14-0.

That would turn out to conclude scoring for the half as both teams were unable to score in the second and Comanche held a 14-0 halftime lead.

Comanche used a trick play in the third quarter to get on the scoreboard again. They did a double reverse before tossing the ball back to Doucet, who then threw the ball to Newton for a 38-yard score.

Comanche was able to put the game away in the fourth quarter. After a big 70-yard gain on a pass from Doucet to Presgrove, Doucet threw a short 5-yard touchdown pass to junior Landon Steele to push the score to 28-0.

Comanche’s final score of the night came on a 38-yard touchdown pass from Doucet to Presgrove.

Little Axe would avoid the shutout with a late touchdown and two-point conversion.