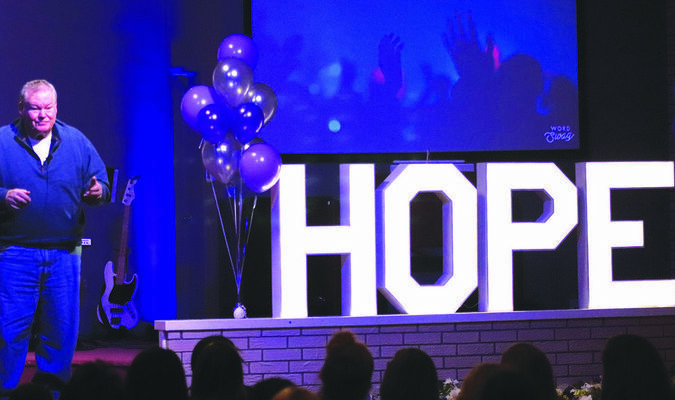 Sometimes, a person has to be at the bottom before they start looking up.

That was the message several Heather’s Hope residents testified as they expressed their appreciation to God and to the people who helped them turn their life around at a celebration held at Providence Baptist Church in Meridian on Sunday night.

The evening started off with music from the church’s worship band as the women and several others in attendance lifted up their hands and swayed back and forth to the music singing praises to their Heavenly Father.

Residents gave testimonies telling of stories being brought up from rock bottom to having hope and a future. Many had been addicted to alcohol or drugs; several had spent time in prison; some grew up in homes where their parents had addictions and continued the harmful lifestyles they had grown up in; some had been involved in abusive relationships; and some had their children taken away.

One thing they did have in common was none had any hope and what it took was for several of them to find themselves in the absolute worst place in their lives before they said, “no more”. They began seeking ways to get themselves out of the pit of despair they had found themselves in.

For many, being a part of the group of women in Heather’s Hope is the first time they have ever felt like they were part of a family. Several have been permanently reunited with their children.

“I’m not saying I didn’t experience difficult times during my time here,” said Heather. “But, I was taught how to walk through these things with prayer, reading the word, going to church, going to Celebrate Recovery, journaling to God and having people in my life to steer me in the right direction.”

Heather said she had been in prison five times and had taken medication and gone to other types of organizations for help, but the Bible and Celebrate Recovery and being involved in Heather’s Hope has helped her the most.

“Nobody wants to have a chaotic, drunken, drug ridden life,” Heather said. “I knew that somehow it was possible to break the chains. I had been attached to them my whole life. I just didn’t know how to break them.”

That process began when she came to Heather’s Hope and learned how to read scripture and journaled how it related to her life. She was given passages to study when she had arrived and found herself even hungrier for the Word and started studying on her own.

“I refuse to let the devil reign in my life anymore,” Heather said. “I can be the person that God created me to be. Heather’s Hope housing has given me hope by teaching me that the mistakes I have made and the addiction that I now have does not have to define me.”

Cheyenne said she was already having problems in her life and then quickly moved to spinning out of control following the death of her mother, who was also an addict.

“Growing up, I had watched her. I watched and learned from her how using is what numbed the pain,” Cheyenne said. “So after she passed that’s exactly what I did, I started using more and more every day.”

She reached a point where she called family members to come take her children because they deserved a better life than what she was giving them.

“The next six years my addiction got worse,” Cheyenne said. “I would use any drug I could get a hold of. The living hell I was in my sixth year was the darkest time of my life. I was homeless and sleeping in sheds. I  was even eating out of dumpsters just to survive. I was in an abusive relationship that almost cost me my life.”

At her lowest point, Cheyenne said she knew everything she was doing was wrong and she realized she could no longer keep hurting herself, her children and her family, so she decided then and there to quit and get sober.

That was in September, 2021. Two months later, she reached out to Heather’s Hope and was accepted into the program.

“Coming to Heather’s Hope completely changed my life,” Cheyenne said. “I’ve been 13 months sober. She getting into the program, I have rededicated my life to God. I have been baptized. I received my GED and I got myself in position to see my daughter anytime I want. I have a hope for a future. I’m filled with such a joy, happiness and hope now.”

After a time of testimony, pastor Randy Weeaks addressed the crowd as guest speaker.

“The Bible says the righteous man falls seven times but gets right back up,” Weeaks said. “You know, sometimes you’ve got to deal with failure. You get knocked down, you get back up.”

Weeaks went on to praise the women for their courage and their willingness to get back up after failures.

“Don’t be afraid,” Weeaks said. “Because I want you to know your courage encouraged me.”

Weeaks encouraged them not to let their failures or fears paralyze them from going forward.

He encouraged them to not to judge themselves by other people’s success.

“God doesn’t call us to be successful, he calls us to be faithful,” Weeaks said.

Heather’s Hope is part of Christian Helping Hands, which provides food, clothing, vehicles and other resources to those in need..