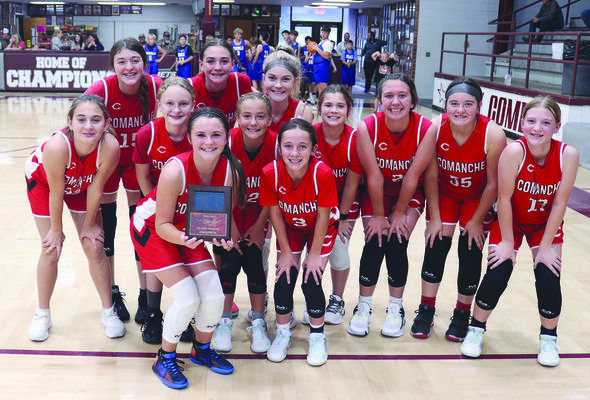 The Jr. Lady Indians defeated Empire in a tight game that wasn’t decided until the final minutes.

With the game tied at 23-all with 1:11 left, Comanche’s Shylah Nichols hit a short jumper with 71 seconds left in the game to give the Indians the lead.

She then added a pair of free throws seconds later to seal the win for her team.

Neither team led by more than six points the entire contest. There were four lead changes and three ties.

Nichols, who had a game-high 14 points, hit a big three right before the half to give the Jr. Lady Indians a 16-13 halftime advantage.

Comanche held a 22-16 lead heading into the fourth quarter, but Empire opened up the final quarter on a 7-0 run that set up the fight to the finish.

Raelee Ellis was second on the team in scoring for Comanche with six points. Cassidy Smith had four points and Makenna Kulbeth had three.

Comanche wins battle of the Indians with Little...