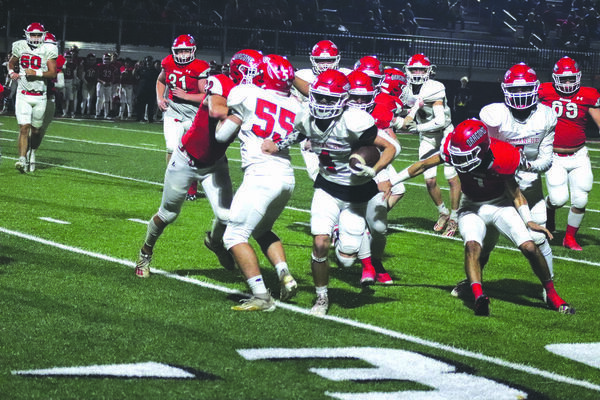 The Comanche Indians had their season come to an end with a 35-0 loss at Purcell last Thursday.

The Indians missed the playoffs for the first time in four years as they finished 3-7 overall and sixth in the district.

It was looking to be a good year for the Indians before the season started, but a couple of key player losses before the first game of the season and then some more key personnel losses in the first few games of the year put Comanche in a hole they could never dig out of.

Against Purcell, the game was decided in the second quarter as the Dragons exploded for four touchdowns. Purcell led just 7-0 at the end of the first quarter as Comanche held their own but could not find the end zone.

The Indians were still in the game, trailing just 14-0 late in the second quarter before a huge momentum shift for the Dragons opened the floodgates.

First, the Dragons scored on a 40-yard screen pass with 2:12 left. That was followed a short time later by a 25-yard touchdown pass with 1:21 to go.

Comanche had the ball for the final minute, but Colby Shannon’s pass on the last play of the half turned into a 60-yard interception return for a touchdown and the Indians suddenly found themselves down 35-0.

Neither team could get across the goal line in the second half. Comanche had drives into Purcell territory several times in the game but could never get the final push they needed into the end zone.

Nine seniors played their final game in a Comanche football uniform. They were part of some memorable wins like Lone Grove and Frederick in 2021.

Comanche wins battle of the Indians with Little...