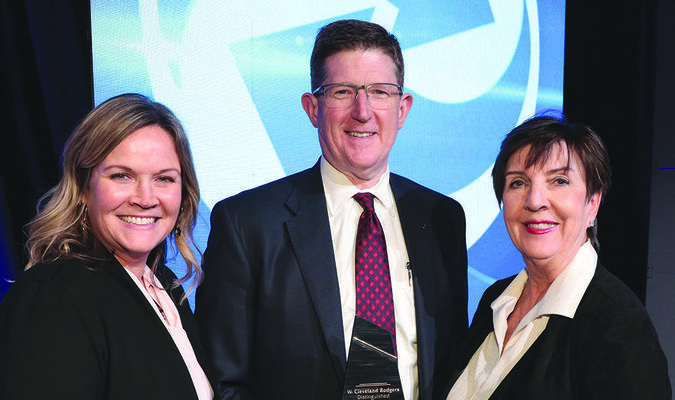 Health care professionals from throughout the state attended the Oklahoma Hospital Association’s (OHA’s) 103rd annual convention, Connect 22, Nov. 9-11, at the Oklahoma City Convention Center in Oklahoma City. In addition to the educational sessions and an exhibit hall, other convention highlights included the presentation of several awards to Oklahoma’s outstanding health care leaders.

He began his career at Parkland Health and Hospital System in Dallas followed by nine years at Stillwater Medical Center and five years at Mercy Hospital Ardmore.

In August 2010, Jay began serving as president and CEO of Duncan Regional Hospital (DRH). Under his leadership, DRH Health has grown from $96 million in net revenue in 2010 to $169 million in 2021 while also maintaining high levels of patient satisfaction. The organization has expanded by adding Jefferson County Hospital along with clinics in 10 communities in southwest Oklahoma. New services include full-time programs in cardiology, behavioral health, and pulmonology/critical care.

Johnson currently serves as the past board chair of the Oklahoma Hospital Association. He served as board chair mid-2019 through 2021. He has been a member of the board since 2013 and he has served on the OHA Council on Policy and Legislation. Johnson received the OHA Advocacy in Action award in 2013 and 2017.

Johnson currently serves as board chair for the Cancer Centers of Southwest Oklahoma. He is the past chair for Vizient’s Arkansas/Oklahoma region and a past delegate of Region Seven for the American Hospital Association’s Regional Policy Board. In 2019, he was named the Duncan Man of the Year by the Duncan Chamber of Commerce, and in 2015 he was named Outstanding Alumni for Cameron University. He is a graduate of Leadership Oklahoma class 29, Leadership Duncan class 16, and Leadership Stillwater class 11. He is the past chair of the Duncan Public Schools Foundation and the past chair of the Duncan Area Economic Development Foundation. He is a fellow of the American College of Healthcare Executives.