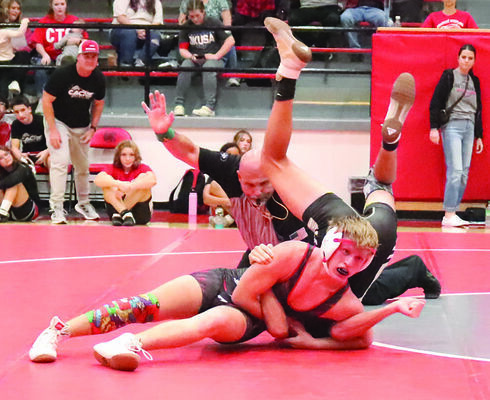 The Comanche Indians fought out of a 12-0 hole and five forfeits to defeat visiting Cache, 39-36, at the home opener for wrestling last Thursday.

Comanche forfeited its first two matches to fall behind 12-0 before Gage Jessen picked up a 7-4 win at 120 pounds. Legend Yates followed at 126 with a win by pin to cut the lead to 12-9.

The Indians, however, had to forfeit at 150 pounds, putting them nine points behind once again at 24-15.

Noah Presgrove got a big pin at 157 pounds to once again get Comanche within three points at 24-21. Comanche, though, had to forfeit at 165 allowing Cache to stay ahead at 30-21.

Kasen VanBuskirk then picked up a pin with four seconds remaining in the first period to keep the Indians’ hopes alive. They would need it as Comanche forfeited its fifth and final bout of the night at 190 pounds.

Kooper Doucet, back on the mat for his senior year, came through with a first period fall that put the Indians within striking distance. Elgin’s heavyweight did not make weight, giving Comanche’s Cade White a forfeit and the Comanche team a win at 39-36.