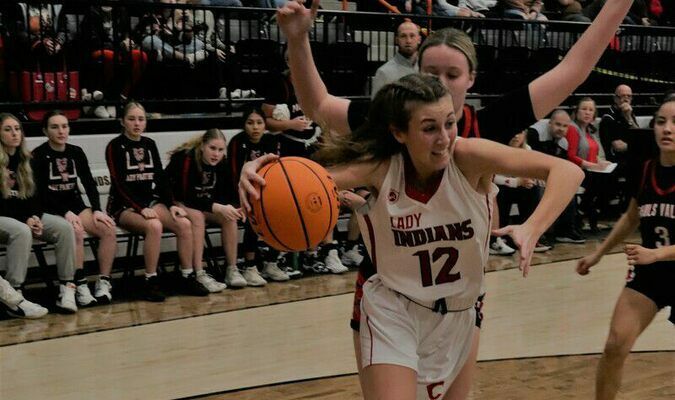 The Comanche girls shook off the rust from a long Christmas break to rally to beat Pauls Valley, 38-34, in the first round of the 2023 Charles K. Heatly Classic in Lindsay on Thursday.

The Lady Indians, the No. 2 seed, led for less than five minutes of the 32-minute game, but most importantly they led the final 1:42 as they outscored the Lady Panthers, the No. 7 seed, 14-5, in the fourth quarter to advance to semifinals at 6 p.m. on Friday.

“I told them sometimes, it’s ugly, but you have to find a way to win and that’s what y’all did in the last quarter,” said Megan Robbins, Comanche head coach. “I was pretty proud of the way they locked in, in that last quarter. We had some girls step up and hit some big free throws toward the end, and they did what we needed them to.”

There were seven ties and five lead changes in the contest with Pauls Valley led at the end of the first three quarters.

The Lady Panthers hit seven three-pointers in the contest compared to Comanche’s three. They also broke three ties with three pointers keeping the Lady Indians in catch up mode for most of the game.

“It was huge to come back and be able to pull it out there at the end and (Pauls Valley) is a good ball team,” Robbins said. “They always put together a good ballclub so it’s always a good battle when we play them.”

Pauls Valley led 12-11 at the end of the first quarter and 18-14 at the half following a low-scoring second quarter.

Karsynn Bowles hit a three-pointer to give Comanche a 34-32 lead only to have Pauls Valley come back to tie it at the 2:54 mark.

That would end up being the last field goal of the game. Kylie Roden hit a pair of free throws with 1:42 remaining to give Comanche the lead for good. Jentry Whaley then hit another two big free throws with 17.8 seconds to seal the win.