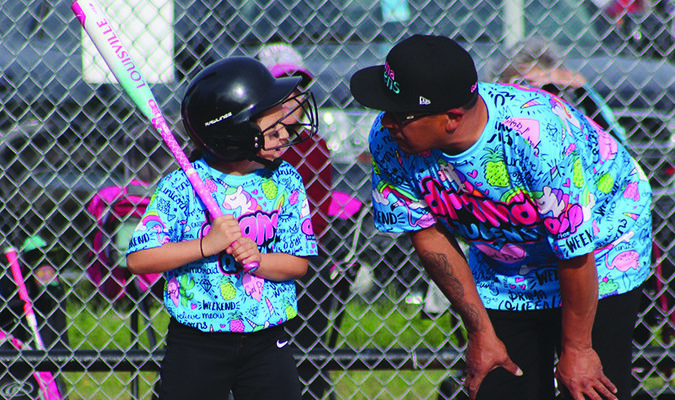 It seems appropriate the baseball and softball facility in Comanche is called the “Field of Dreams.” People from all over are coming to it.

Seventy-one teams hailing from Comanche, Ryan, Walters, Waurika, Temple, Empire and other places are playing everything from t-ball, to machine pitch, to kid pitch. In all, there are more than 300 league games scheduled, not including tournaments.

One big factor why there is such a great turnout this year was because of what happened last year, according to Nick Reed, who along with Ty Massey, are co-presidents of the Comanche Sports Group.

“When COVID hit last year, we still got to play, but it was later in the year,” Reed said. “I guess several of those teams who came to play last year started to come back. It’s great for the community.”

“There’s not a lot of room for rainouts because there are so many teams,” Reed said. “We’re trying to get each team the same amount of games to give them a fair shot at seeding in the playoffs. You don’t want to have one team with 10 games and another with six games. It’s a little tough, but we’re just going to try to work the best we can. If we have to play some games on the weekend, we have to play some on the weekends.”

Last Friday’s opening day was rained out, which postponed 36 games. Monday turned out to be opening day. There will be more than just league games, however. June 5-6 is the annual Veteran Bat Classic, a wood bat tournament.

“Veteran Bat is a company that I own and we have 10-under, 12-under and 15-under teams come out to play for the weekend. It’ll be a four-game guarantee and the age division champions will get custom wood bats,” Reed said.

“We played until 2 a.m. on Monday morning to finish it up,” Reed said. “In 15-under last year, we had a team from Kansas and another one from Dallas. It’s a pretty good event just because it is wood bat and kids like the change.”
The city has also made upgrades to the ballpark. The old restrooms behind the high school baseball field have been torn out to make way for more concession stand storage and another concession window. The new bathrooms are also now completely done.

“We will probably just use that new concession window for snow cones,” Reed said. “They can take a while to make so that way it is not causing a big backup at the other concession windows.”

All the hard work over the past few years has definitely paid off.

“The more we stayed steady here and people seeing what we were offering, the more interested people got in coming here and is what it is today,” Reed said.