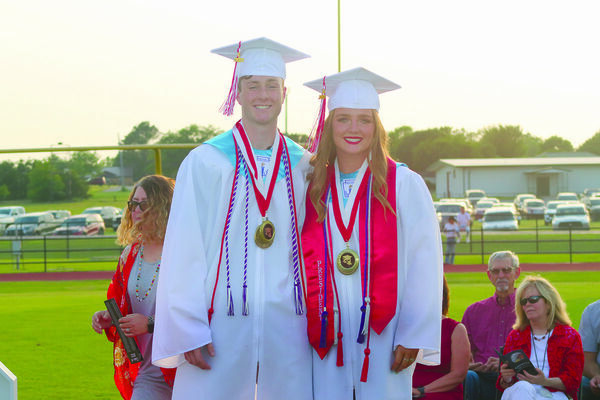 Another chapter in Comanche High School history was completed as the Class of 2022 graduated last Friday.

The weather cooperated as the 80-plus graduates put the final touches on their high school career.

All of them thanked people in their lives from family and friends to teachers that had impacted their lives.

Banner had some words of advice to his fellow graduates.

“If I had one piece of advice to give my fellow peers it would be that nothing great in life comes easy and those who want respect giv respect,” Banner said.

Michael Clark described how he never thought when he was younger that he would be a valedictorian after being an average student in middle school.

“Sometimes, something or someone just awakens something inside of us that makes us want to be the best we can possibly be,” Clark said. “Let me offer one last piece of dad advice. This goes out to the next year of seniors, this new generation of freshmen and everyone inbetween. You don’t have to carry the world on your shoulders, just do what you can and pass the torch onwards.”

He also went on to give advice to his fellow graduates.

“As I take my next step forward, I don’t know what I’ll end up being, but I can promise that I will give everything I have to give. Let’s all do the same.”

Trumbo also had some advice for her peers and those that will come afterwards.

“As you have made your way through middle school and high school from elementary school, you can now go into the workforce, a technical school, or a university to pursue your dreams,” Trumbo said. “Just remember, your teachers are the people who helped get you there.”

Alvarado named Teacher of the Year