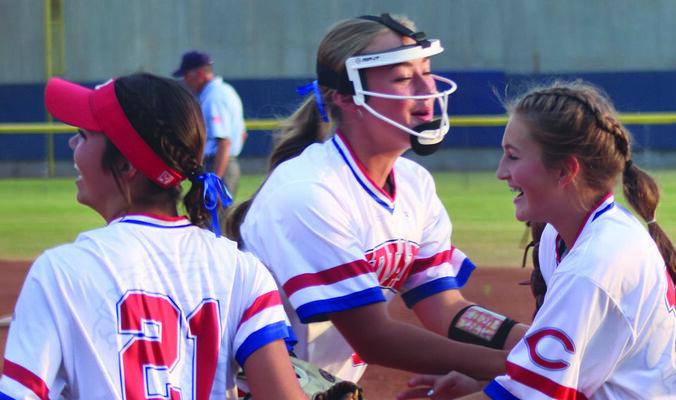 For five innings Comanche led the No. 2 team in the state, North Rock Creek, but the Lady Cougars rallied for five runs in the final two innings to eliminate the Lady Indians on the first day of the Class 3A State Tournament, 5-4.

The game had been going well for Comanche up until the final two innings at Hall of Fame Stadium in Oklahoma City. The Lady Indians led 3-0 lead after two innings and then added another run in the fifth and looked poised to make it to the state semifinals for the first time in school history.

Some hard hits and some fielding miscues, though, allowed the Lady Cougars back into the game in the sixth inning before they pushed across the go-ahead run in the top of the seventh.

“Obviously, it’s disappointing,” said Aaron Minor, Comanche head coach. “We had the game in our hands. I was thinking going into the sixth inning that we needed six outs and then we had some blunders in the field in that sixth inning.”

Minor did not blame it all on the sixth inning, however.

“We also missed some opportunities at the plate early, early in the inning,” Minor said. “We were a hit away from opening it up and scoring more runs and then maybe those errors in the sixth inning don’t hurt us. They’re a good team. You can’t make mistakes like that. I knew this team was ready and I knew we could beat them and we almost got it done.”

It was the second straight trip to the state tournament for the Lady Indians, which Minor said was something to be proud of.

Comanche is losing five seniors and will have to replace the left side of its infield with four year starters Brighton O’Connor and Gracee Miller graduating. They will also lose Aspen Loafman, Grace Kinkade and Ashlyn Jobe.

“You think what we have coming back next year, we should be pretty good, but getting to the state tournament is not guaranteed” Minor said. “You’ve got to scrap and claw and have things go your way a little bit. This is where we want to be every year and so hopefully we can come back with that mindset ready to grind it out again next year.”

In the bottom of the first, Bre Gill led off with a walk and later scored on a single by Jentry Whaley to put the Lady Indians up, 1-0.

Comanche would add two more runs in the second when Miller led off with a single and scored two batters later on a single by Kamrey Rendon, who started the game on the mound for the Lady Indians.

That was followed by two more singles before Raylee Chaney hit a sacrifice fly to left field to score pinch runner Jobe.

In the bottom of the fifth, O’Connor led off with a walk and would later score on a single by Josey Harris to put the Lady Indians up 4-0.

Three singles and two errors in the top of the sixth allowed the Lady Cougars to tie the game at 4-all. Comanche could not respond in the bottom half of the inning, taking the game to the seventh inning knotted at 4.

North Rock Creek pushed the final run across on a sacrifice fly following the lead-off batter reaching after getting hit by a pitch and then advancing to second on a wild pitch and then stealing third.

The Lady Indians gave themselves a chances when Josey Harris singled to lead off the bottom of the seventh, but the Lady Cougars recorded three straight outs to complete their comeback and advance in the tournament.

Rendon pitched all seven innings for Comanche. She gave up seven hits, three earned runs, walked one and struck out five.

Comanche ended the season with a 28-9 record.