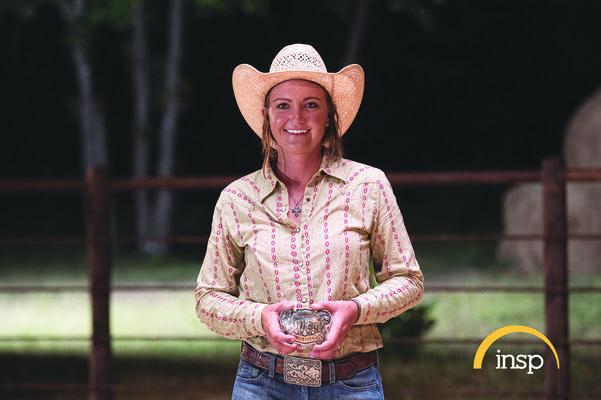 Katey Jo Gordon beat out 13 other cowboys to win the title of the Ultimate Cowboy when show host Trace Adkins named her the “Ultimate Cowboy Showdown,” champion on the INSP network last Wednesday.

Gordon had worked her way through each challenge and found herself standing in the season finale with John Paul “J.P.” Gonzales of south Texas and Tyler Kijac of Jay, Oklahoma by way of Michigan.

Kijac was the first to be eliminated, leaving just Gordon and Gonzales.

After briefly talking to each one, Adkins paused several seconds after saying, “the Ultimate Cowboy Showdown is” and then naming Gordon the winner.

“In my mind, I was going, ‘Holy crap.’ I just didn’t know what he was going to say honestly because J.P. was such a hard competitor,” Gordon said in a zoom interview with The Comanche Times. “He was so handy and such a good guy. I honestly didn’t know. We were in a tight race and at that moment in time, I knew it could go either way, so I was extremely nervous there.”

It ended up going the way of Gordon, who lives outside of Comanche with her husband Dylan. She had spent several years living and working at her parents’ ranch in Ryan before marrying her husband and Ryan is listed as her hometown on the show.

“I knew I had performed well and stayed true to myself throughout the whole thing, but I didn’t know if it was going to be enough because he did the same thing and he was an awesome guy, so I was just flabbergasted when he said my name and I was like, ‘Oh, yeah!’”

The main prize was $50,000 worth of cattle. She also won a chute and other things. The cattle have not been delivered yet. They are working on buying a piece of property in the Addington area for the cattle.

While that accomplishment is not lost on her, she just saw herself as being a cowboy like any of the male competitors.

“Yeah, honestly, to me it was just, we’re all the same,” Gordon said. “I don’t want everybody to be like, ‘Well, you know, she had to work extra hard or she played the girl card,’ or this or that. My label shouldn’t be anything different than theirs. I feel like we kind of deserve equality and the whole thing because we are capable as women in the industry. I wanted people to see it wasn’t just women vs. men or anything like that, it was just that we were all cowboys and that we did our jobs.”

Gordon was not afraid to step up to take a leadership role and therefore put a target on herself if something went wrong.

“I would just read the situation and when somebody else wasn’t stepping up, there had to be a leader every single day because you can’t just have a bunch of Indians running around with nobody to guide us,” Gordon said. “I didn’t necessarily want to be the leader, but if no one else wanted to, I didn’t mind stepping up into that role.”

She did avoid much of the drama on the show between contestants, some of which stemmed between cowboys who worked on ranches and cowboys from the rodeo circuit.

Gordon has a lifetime of experience in both.

Her horse, “Pedro,” also became a star of the show.

“A lot of people asked me if I wanted to sell my horse or where he came from,” Gordon said. “Everybody loved him. One person on Instagram started out with the hashtag “VoteForPedro” and it caught absolute fire and everybody started using it. I’ve had so many people reach out and talk about how we were such a great team. Everybody loved him which I think is great because I couldn’t do my job without him.”

She is now adjusting to the life of being recognized. From the time she left her watch party after the season finale at her parents’ home until the time she got home, she had received 125 Facebook notifications.

“It took me two days to go through all the Instagram notifications,” Gordon said.

The only people she was able to tell she had won were her husband and her parents.

“People kept asking me if I had won, and I was like, ‘I can’t tell you, you are just going to have to watch the show,’” Gordon said.

She is not sitting back and relaxing, though. She is working on her and her father’s ranches and doing some rodeo. She won a breakaway roping event at Lindsay this past week and will be competing at the Stephens County Fairgrounds this weekend in the Cord McCoy Rodeo.