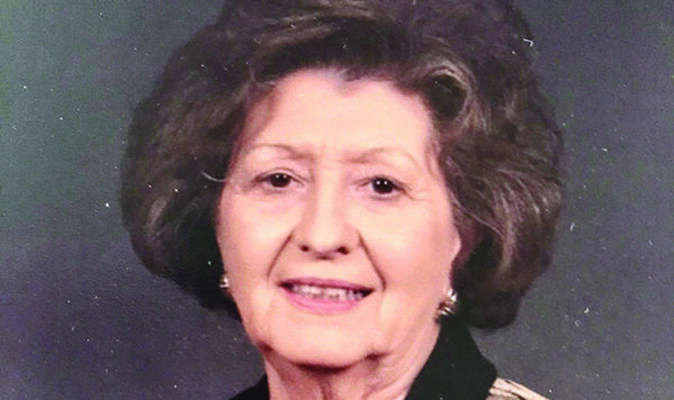 Janice Louise Slate, 89, passed away in Lampasas, Texas on December 15, 2021. She was born in Purcell, Oklahoma on May 6, 1932. Janice was the last surviving child of John Davis Motsenbocker II and Reppeard Virgie Hopper.

A Celebration of Life service will be held on December 20, 2021, 10:00 AM at Unity Baptist Church, 1725 West Chisholm Drive, Duncan, Oklahoma with Brother David McAllister officiating, assisted by Brother Dan Standifer. Burial will be next to her husband Ralph, at the Fairlawn Cemetery in Comanche, Oklahoma. Arrangements have been entrusted to Whitt Funeral Home, Duncan.

Janice was a 1950 graduate of Noble High School, Noble, Oklahoma. Janice met the love of her life, Ralph L. Slate, in 1950 and they were married on December 28, 1951. To this union, four children were born: Richard, Stephen, Dana, and Dennis.

She attended the University of Oklahoma from 1950 to 1951 but left Oklahoma in the spring of 1951 to live with her sister in Big Stone Gap, Virginia. She returned to Noble, Oklahoma, in 1951 and married in the fall, as noted above. After marrying she and Ralph moved to Shepherd Air Force Base, Wichita Falls, TX, where they remained until he was released from active duty. Upon release from active duty in 1953, they moved to Clute, TX, in Brazoria County, Texas where Ralph worked for Dow Chemical for 2 years until they returned to Norman, OK, where Ralph received his B.S. at the University of Oklahoma.
Upon graduation from college the family (now 5 with Richard, Stephen and Dana, in tow) moved to Duncan, Oklahoma, where Ralph had accepted a position as a staff chemist with Halliburton Oil Company of Duncan, OK. Janice began working in 1969 as secretary/administrative assistant at Liberty Elementary of Comanche Public Schools, where she retired in 1989. Once Janice retired, she read avidly, painted, traveled, baked, and attended to her family and grandkids while always rabidly supporting her beloved Sooners. She was a member of Unity Missionary Baptist Church from the 1960’s to the present.
Janice is survived by her children: Dr. Dennis Slate and wife Denise of Conroe, TX; Stephen Slate and wife Debbie of Noble, OK; and daughter Dana and husband Kenny Brown, of Georgetown, TX. Janice had five grandchildren, John Slate, LeAnn French, Jarod Slate, Andrea Slate, and Caleb Brown, and seven great-grandchildren. She was preceded in death by her parents and five siblings. She was also preceded in death by her husband of 69 years, Ralph L. Slate, and her eldest son, Richard L. Slate of California.
Online condolences can be made to the family at www.whittfh.com.